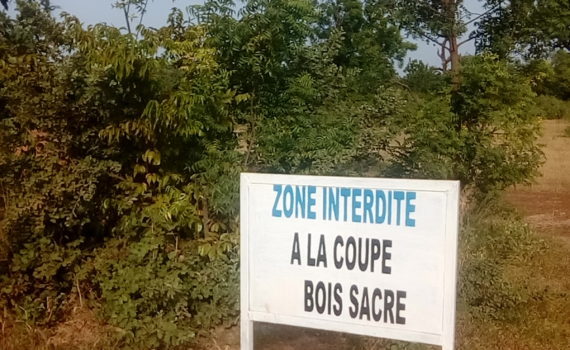 Sacred woods gather here the natural sites designated under this name or under the name of sacred groves, sacred forests, wooded sanctuaries. They also include the sacred hills. They are relics of original forests protected by local communities as an important support for their religious life, their identity and their social cohesion. They benefit from proven customary conservation rules, transmitted from generation to generation and which generally prohibit the removal or destruction of natural species found on their site.

Sacred woods are present throughout the country with an increasing frequency from the Sahel region to the southern regions (SAWADOGO, 2013). Their areas vary between 0.02 ha and 300 ha (SAWADOGO, op.cit, p.107) with an average of 5.17 ha (Ibid). Survey and study data suggest that there are, on average, 6 (six) sacred groves per village in Burkina Faso. Considering the 8,902 administrative villages in the country (MATD, pers. Com. 2017), it is possible to estimate the number of sacred groves at 53,412. This justifies estimating the total area of ​​sacred groves at 496,320 ha, or 01.8% of the area of ​​the national territory.

The sacred groves and their surroundings are rich in dense and diverse natural resources; they constitute refuges of many rare flora and fauna species, threatened with disappearance or disappeared in the surrounding terroirs (SANOU, 2013; KABORE, 2010). Certain flora species are only observed in sacred groves (SANOU, op.cit). SAWADOGO (op.cit, p.24) has identified 470 species from 284 genera and 74 families of Burkinabè flora are present in the sacred woods and their areas of influence, ie 24.54% of the national flora. 50% of sacred woods are shrub savannas, 20% tree savannas, 20% thickets, 10% wooded savannas.